In august 2018, a surveillance device is found in the squat Awhanee in Grenoble (France), not long after the place was searched by the cops. This example was already present in our list of examples but with very little information.

A testimony of the people living in the squat about the search was published in august :

We received by email a new testimony concerning this surveillance device, as well as pictures of the device. We publish here the testimony and the pictures.

More or less, one morning, the cops come at the squat at 8 a.m. for a search.

A few days later we think that maybe there are bugs in the house. By looking at the living room, we think that the best to hide a bug may be the multi-socket adaptor in the middle of the room. Using a screwdriver we discover the truth.

A thingy containing a printed circuit board, a battery, is mounted on the adaptor. The cops taped up a leaflet found in the room to hide it. (it can be seen on the device picture)

We think that, after confining everybody to the garden, and while the narcotics cops were doing the search, other cops were securing the house.

When the search reached the living room, a narcotic cop sent his colleague to warn downstairs : “go downstairs and tell them that we’re finished with this floor, and that the stairs need to be secured”. At the time the search witnesses thought as if we’re going to do something 2 against 20.

But looking back, we think that it must have been the moment when the bug was placed, and after this moment, the search mostly sped up. With sentences like “what there’s another basement”. 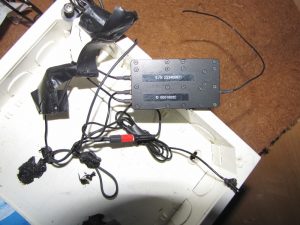 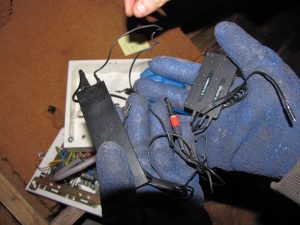 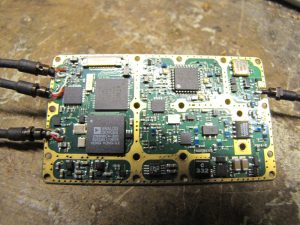 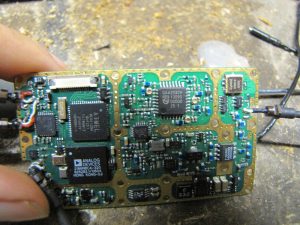